Parents, schoolchildren, residents and traders are holding a protest march against plans that will increase pollution on highly polluted streets and at four primary schools. 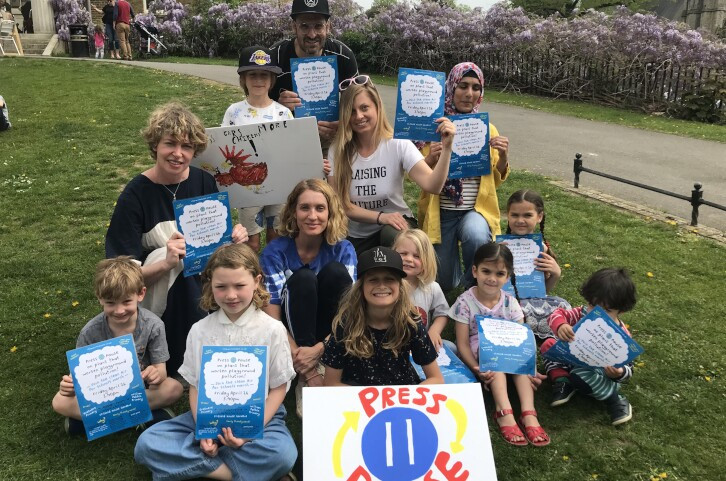 The PressPause March, which takes place at 3.40pm on Friday April 26, will urge Hackney Council not to go ahead with road closures that will displace thousands of cars past schools and homes where people are already exposed to illegal levels of pollution until plans are actioned to drastically clean up the air there.

Nicola Sinclair, a parent at Grasmere Primary, said: “We share the Council’s goal of reducing rat-running and persuading people to stop driving. But in this case the harm to schoolchildren of closing these roads now will be disproportionate to the benefits they bring for a few back streets, so we are asking the Council to press pause – at least until the Ultra-Low Emission Zone rolls out to Stoke Newington in 2021, when pollution levels at schools should drop.

“Pollution in our playground will be tipped over the legal limits if the road closures go ahead now. We’ll have a 37% increase in southbound traffic past the school and the Council say the isolated impact of the closures will be a 3.3% increase in nitrogen dioxide.”

The closures will increase traffic past Newington Green Primary’s playground by over 2,600 extra vehicles each day, cause an estimated 4.6% increase in nitrogen dioxide at William Patten Primary (dubbed by the Mayor of London ‘one of London’s 50 Most Polluted Schools’) and a 3.9% increase at St Mary’s, which is already illegally polluted.

Although the Council claims it has plans to mitigate against pollution increase on Church St, campaigners say that will take several years and that children’s health will be put at risk in the meantime. And there’s no plan to mitigate in Albion Road.

Lou Power, who lives on Albion Road and runs a business on Church St, said: “The council’s report admits that homes in much of Stoke Newington Church Street, the southern portion of Albion Road and Crossway are likely to become illegally polluted if this scheme goes ahead. Children like my daughter who live and go to school on Albion Road, will be exposed to toxic air 24/7 for most of their young lives and Hackney Council’s plan to knowingly make that worse is abhorrent.

“Rather than allowing Cabinet members to take a democratic vote about these closures, the Council is asking them to delegate the decision-making to a single officer. We’d urge them not to do that but to reject the recommendation and vote to protect vulnerable schoolchildren.”

The march departs from Grasmere Primary and William Patten Primary, gathering in Clissold Park for a rally at 4pm.