Two years ago, filmmaker Adrian White woke up to a monumental shift in his mental health which he describes as “off the scale anxiety.” 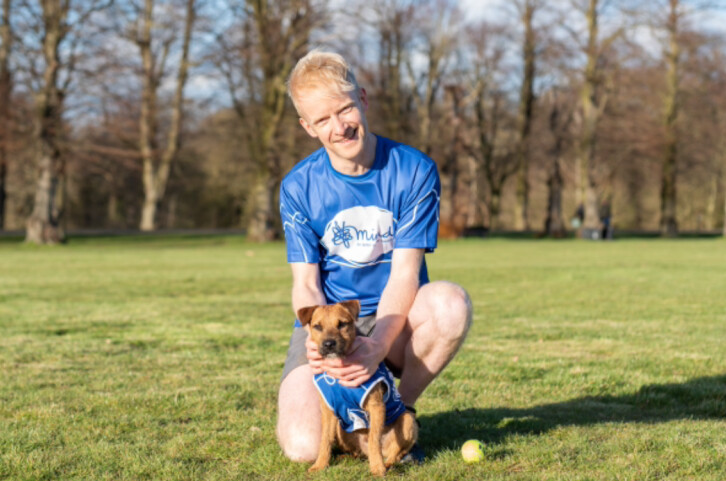 He said: “The world felt a little darker, as though the security blanket that had always been there had been stripped away from me.”

Since then, determined to better understand his situation, he’s seen numerous therapists, taken up yoga, lived in South East Asia for five months and studied mindfulness and martial arts in a Shaolin temple.  And he’s just returned home from a 200-mile run with his dog Teddy around Britain’s canals and waterways to raise funds and awareness of Mind, the charity that helped him.

Word on the Street caught up with Adrian to hear all about his adventure.

Describing the run, he said: “The scenery was amazing; while some bits weren’t quite so easy on the eye, places like Henley-on-Thames and Marlow were stunning. I’ve always loved the canals and the way you can be in the middle of the city and yet find peace.

“The weather was amazing; In the 19 days I was running for, it only rained once!  I’d typically run around 15 miles a day and I was joined along the way by my brother and various friends.

“For Teddy being out all day at the canal was a dream! He ran in an extra small women’s vest, which my seamstress friend adjusted for him and he got lots of attention.”

The original plan was to cover an 800 mile stretch all the way up to the Yorkshire Dales, but when Teddy (a Border Terrier/Jack Russell cross) cut his foot, the vet advised they cut the trip short; they made it as far as Bristol before the injury, and then decided to get the train across to Northampton before heading back to London.

Adrian stayed with friends along the way and, when they heard about his fundraiser, 10 hotels (including a luxury spa) put him up for free.

He added: “Mind have been an amazing support to me through these difficult times and the run was my way of saying ‘thank you’.  When you go to the NHS for something like anxiety, there are massive waiting lists, but Mind offered group therapy sessions quickly and then 16 one-to-one sessions – all of it for free.

“I had three goals when I set out - the first to talk openly about mental health and highlight the fact that opening up about your issues is key to getting better, the second to show that running and jogging can be really good for mental health and great for anxiety and the third to show how pets are good for your mental health!”

Adrian’s Just Giving page is currently at just over £2,700 – which will go to the mental health charity Mind.

Asked what he plans to do now he’s back home, he said: “I met a very cool and incredibly inspirational guy when I was in Asia who teaches Qi Gong in the Black Forest, so I’m going to try and get out to Germany for a week.

The world felt a little darker, as though the security blanket that had always been there had been stripped away from me.