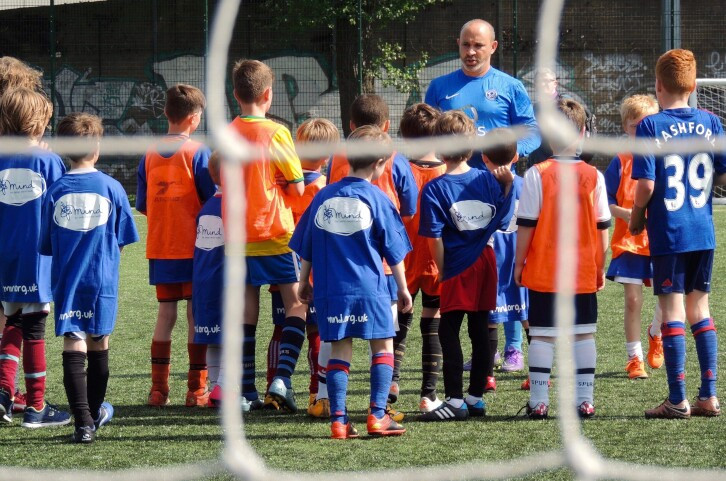 This summer, the 49-year-old father of three organised a football tournament at Stoke Newington School to raise funds for The Crib (an inclusion/intervention project helping young people choose the right path) and the mental health charity Safaplace.

He’s driven by a desire to give back to the community he grew up in, to give teenagers the credit they deserve and to run positive, inclusive sessions where children and parents learn football skills.

Tony set up Socceroonies football sessions 11 years ago and now offers training every Saturday morning in Clissold Park to children aged four to 11.  He had been working as a talent scout and coach for Charlton when they were in the Premiership.

He said: “I was disillusioned with the way children were being trained in the academies – they often left feeling disappointed or not feeling great about themselves – so I resigned.

“I run Socceroonies because I want to give back to the community I grew up in, I feel very nostalgic about Stoke Newington. When I was a kid there wasn’t so much to do.  We had clubs but no real groups, we couldn’t afford to pay for football. It was a case of making do with what we had – playing in the streets with a ball.”

At Socceroonies there’s a big emphasis on parents watching and, at times, joining in, so football becomes a shared interest at home.

Tony’s Socceroonies Do The Crib charity match, which took place at the end of May, raised £1,326 and had support from footballer Calum Best and former Radio 1 presenter DJ Spoony.  Around 20 adults and teenaged players took part, including Tony’s sons Anthoney, 30, Oliver, 14, and Zachary, 12.  The event started with fun games for under 11s.

Explaining why he chose to support Safaplace and The Crib, Tony added: “Teachers, coaches and parents are all people children look up to as positive role models and we have to show them the way. There’s such pressure on parents who have to work, a lot of children fend for themselves. When we were younger, doors were left open and communities looked out for children but now people are too quick to shut doors – if we step up as a community, as parents and coaches, we can help. We hear about stabbings, but the majority of teenagers are good and I want to show them in a positive light.”

Tony, who went to St Matthias Primary and Woodberry Down Secondary (which he won a competition to name) used to play football for Enfield Town but retired after a bad injury.