A courageous Stoke Newington woman has achieved an ambition of a lifetime, becoming the 2631st person to swim the English Channel. 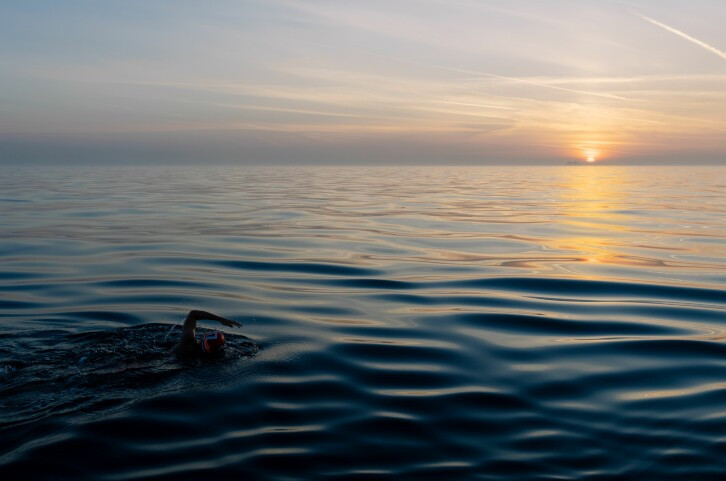 Hannah Parker took on the gruelling challenge of swimming the english channel solo on Monday 6th September to raise money for a selection of charities including: MS Society, Prostate Cancer UK and the Karuna Trust

It took her 14 hours 52 minutes to swim her way across the 22-mile channel, one of the busiest shipping lanes in the world, which has an average water temperature of around 18 degrees. The tides result in every swimmer having a difference experience and route with Hannah swimming approx. 48 miles in total.

Hannah, 29 said: "On Tuesday afternoon on the 7th of September, I reached the steps of Wissant beach in France after 14 hours 52 minutes of swimming. I was the 2631st person to do a solo swim of the English Channel.

We left at 11.40pm on Monday 6th of September and I swam through the night to sunrise, which marked that we had gone past the half way point and were in the North East shipping lane. For the most part, I enjoyed the swim and after a very long wait and missing our initial tide due to bad weather, was so happy to finally have my shot at the challenge.

When we reached French Inshore Waters and France was in sight, we experienced a strong wind and choppy waters, meaning I had to work twice as hard when I had almost nothing left to give. We were swept with a strong tide past the Cap Gris Nez landing point, adding an additional 3 hours onto the swim. I knew I had not come that far to even consider giving up - I was exhausted but I was still determined.

For what I was about an hour, (but felt a lot longer) it seemed like we were going nowhere, I was pushing to break out of the tide so that we could start making our way into land. I was swallowing a lot of water, my palms were brushing against a swarm of jelly fish and my shoulders were exhausted. It became apparent when everything ahead of me started to become slightly clearer in my vision, that we were moving forward and the end was in sight.

Seeing the sand beneath me and my feet touching the ground in France is a moment I have been thinking about for years.

I pulled myself up onto the steps at the beach of Wissant to an audience of French locals who applauded me and wanted selfies - I could barely stand and was very emotional, but still managed to pose with them for a photo!

'Nothing great is easy' was famously said by Captain Webb who became the first man to swim the channel in 1875. The sentiment is still so true to this day.

It was possibly the biggest of physical and mental strength I may ever put myself through, but it’s also an experience I will treasure for the rest of my life.  Despite all of the sacrifice, months of training, covid set-backs and weather hurdles over the past couple of years, I can hands down say - it was worth it.

On board - my coach Tim Denyer, partner Charlie Burgon, friend and photographer Henry Redcliffe were instrumental in providing the support needed to get me to the shore of France."

She has so far raised over £18,000 for MS Society, Prostate Cancer UK and the Karuna Trust and will be continuing to take donations until the end of September - click here to donate.

Seeing the sand beneath me and my feet touching the ground in France is a moment I have been thinking about for years.